Are your Liver Enzymes Elevated or do you suffer from Liver Disease? Has your Gall Bladder been removed or do you have digestive problems?

Key Ingredients of our liver supplement

Milk Thistle extract has long been used for chronic liver disease, including liver cirrhosis, chronic hepatitis and gallbladder disorders. The active compounds in milk thistle are called silymarin. Based on a review of several clinical studies that studied the potential effects of milk thistle on liver, it is not clear whether milk thistle has any effect on liver function1.

Dandelion (Taraxacum) stimulates the secretion of bile from the gall bladder and thereby improves digestion and stimulates elimination. Dandelion has shown some promise in animal studies, however it is not clear whether dandelion extract has any effect on liver in humans2.

Chicory Root (Cichorium intybus) has traditionally been used for the manufacturing of coffee substitutes. Chicory root main component is inulin, but it is is rich in aromatics and minerals, which may provide relief from bloating and soothe digestion. Chicory extract and inulin have been shown to lower cholesterol absorption from the gut in rats3, but a similar effect in humans has not yet been investigated.

Artichoke Leaf (Cynara cardunculus) has long been used for liver and digestive problems. The active compound in artichoke, cynarin, has been shown to stimulate the flow of bile in rats4. Artichoke extracts have been shown to provide antioxidant protection of human leucocytes in cell culture5.

Larch (from the Larix occidentalis and Larix laricina trees) is a powder extract that contains digestable and fermentable fiber. Larch is particularly high in the Arabinogalactan Polysaccharide, which is a branched, high molecular weight sugar polymer that may support immune function, liver function and digestion6. 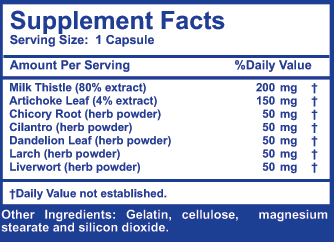 There are no reviews yet.

Be the first to review “Liver Supplement” Cancel reply